A complete arsenal to eliminate odors at the source on surfaces, under surfaces and in the air

The key to maintaining healthy indoor air, free of unpleasant odors, is to eliminate bad odors at the source, under surfaces, on surfaces and ultimately in the ambient air.

Larose offers complete solutions to control the worst odors. These solutions are based on scientific studies on odor and patented technologies, in addition to a veritable arsenal of cleaners, disinfectants, biotechnological products, liquid neutralizers and space sprays.

3 distinct lines, depending on the situation, to overcome the worst odors:
AIRx®, BIO-SOLUTIONS® and AROMA SOLUTION

AIRx®, Eliminate odors at the source 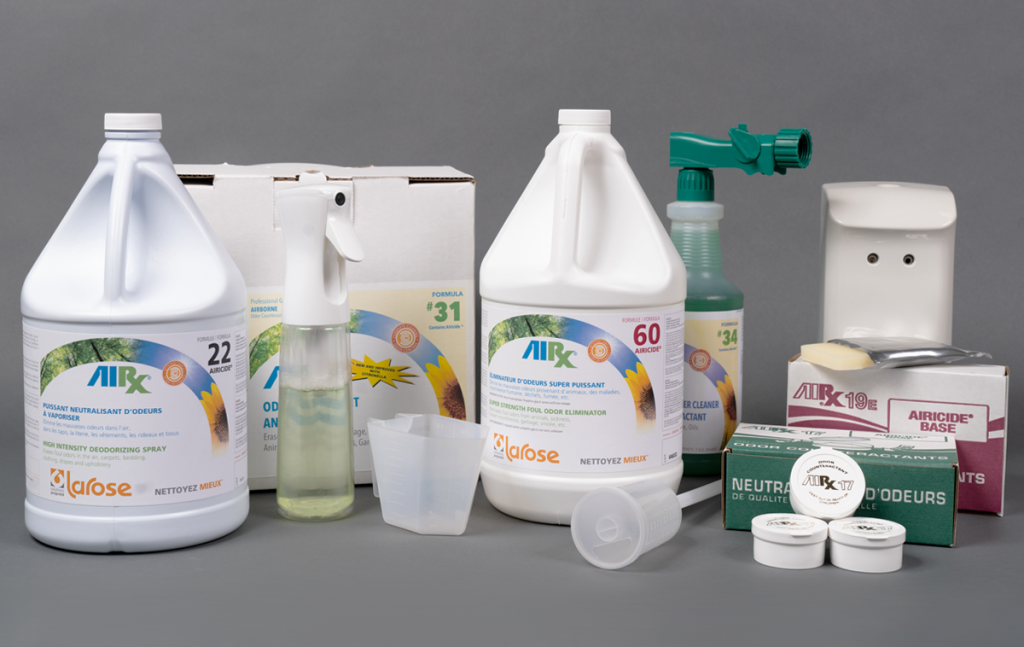 Composed of more than 20 products, all cleaners in the AIRx® family contain the AIRICIDE® agent. The patented AIRICIDE® technology transforms the odoriferous molecule, making it unperceivable by human olfactory receptors.

AIRx®, A COMPLETE PROGRAM TO ELIMINATE ODOURS ON SURFACES, UNDER SURFACES AND IN THE AMBIENT AIR.

Got an odor problem? First eliminate the source on the surface, or under the surface.

AIRx 80 AIRx 81 AIRx 82 and AIRx65 carpet, fabric and porous surface cleaners effectively remove organic stains (blood, urine, food, vomit) and encrusted dirt that cause bad odors. They effectively neutralize animal, smoke and other odors impregnated in fibers and crevices. At the same time, the ambient air is treated and a clean residual odor remains long after the job is done.

AIRx: If the source of the malodour must remain, neutralize it.

In many situations it is impossible to eliminate the source of the problem. Liquid odor neutralizers to be sprayed on the source are indicated and the patented AIRICIDE® agent, unique to the AIRx line, is incomparably effective.

In these cases, AIRx 22, AIRx 60 and AIRx 100 liquid odor neutralizers to be sprayed or sprinkled directly on the source will overcome the worst putrefactive odors while waiting to remove the source or simply to improve the quality of life despite the presence of a persistent malodorous substance (e.g.: incontinence underwear bin, vomit, cadavers, garbage containers, animal cages, litter boxes, soiled mattresses, soiled laundry). They are safe to use and have no impact on surfaces and it is safe to incorporate them into other odoriferous liquids to neutralize the odor (paints, additives, soiled wash water) or to add them to your cleaning solutions as an odor neutralizing additive.

AIRx 17 and AIRx 19 solid blocks and pads are designed to completely eliminate unpleasant airborne odors, rather than perfume the air with any fragrance. AIRx® blocks and pads contain 100% AIRICIDE®. They are azeotropic unlike conventional blocks or volatile jelly products. The capillary action of millions of microscopic cells releases the AIRICIDE® odor neutralizer consistently and evenly, and they retain their uniform effectiveness throughout use. They can be inserted into wall-mounted dispensers, placed on surfaces or concealed with their self-adhesive packaging.

Learn more about your sense of smell and AIRx®’s exclusive patented AIRICIDE® agent.

For the complete treatment of foul odors on surfaces, under surfaces and in the air, consult the complete AIRx® range in the transactional catalog.

Or better yet, ask one of our experts for advice! 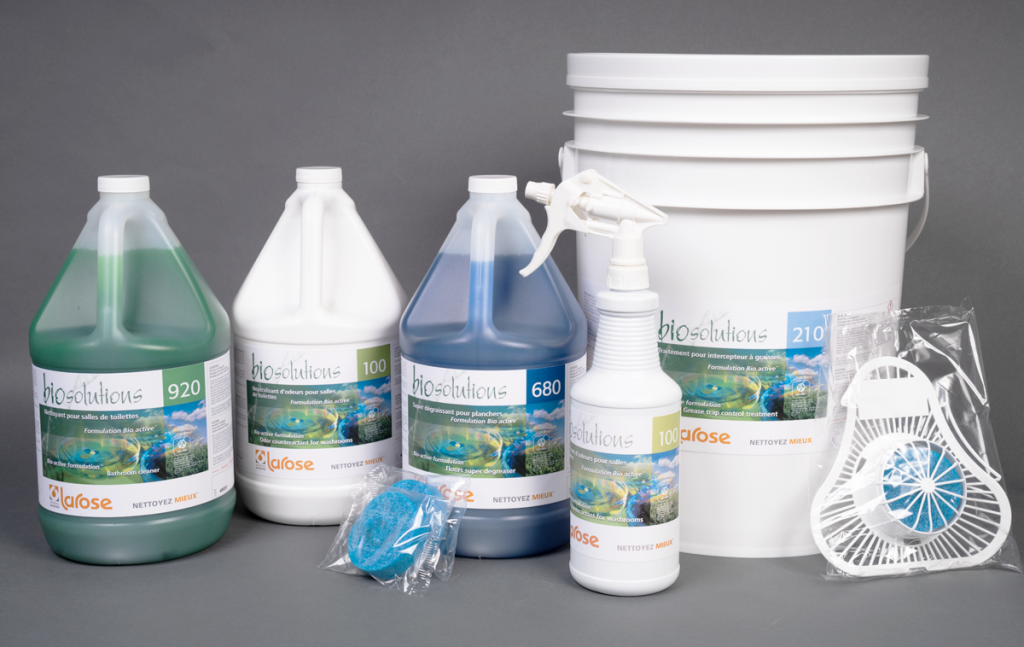 Attack the real source of the problem, Clean Better … under the surfaces

The source of odors under surfaces is often the hidden cause of unpleasant odors that persist despite the use of sprayers or surface disinfection. It is not enough to remove visually visible organic matter damage when microorganisms have penetrated the surfaces, for example in the ceramic joints. In these conditions, Bio-Solutions® biotechnological products with bio-active® formulations are indicated. They are safe and ECOLOGO® certified.

Ceramic tile joints in kitchens and bathrooms, carpet and fabric fibers, pipes, and garbage chutes are all places where organic residues, food, blood, urine, and fecal matter can be found under surfaces, allowing microorganisms to proliferate and causing unpleasant odors.

BIO-SOLUTIONS® products are bio-active® formulations composed of powerful detergents, with an optimal amount of bacterial strains and enzymes that provide a long-lasting residual effect that directly attacks encrusted organic matter.

Learn more about our innovation in biotechnology 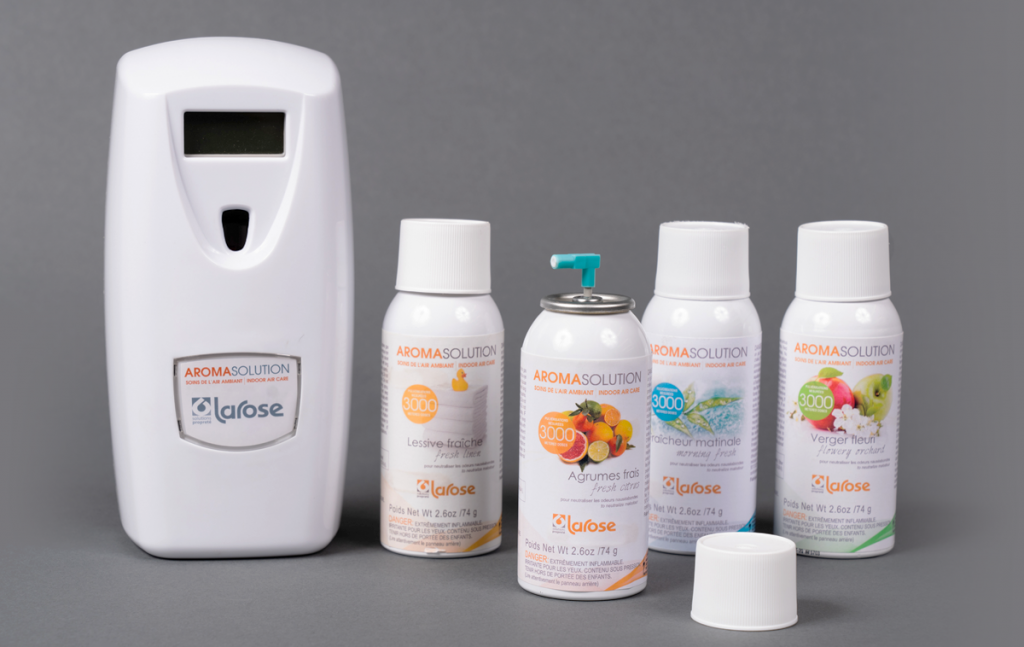 Wall-mounted dispensers for air sprays in aerosols, gel blocks and pads or liquid products are widely used in restrooms and public spaces. While not designed to treat foul odors, nor eliminate the source of the problem, these products can address the need to freshen the air and leave a pleasant perception of cleanliness.

Gel blocks and pads and economical liquid products are volatile and quickly lose their effectiveness. They are replaced and discarded before their intended end or simply left in place to no longer disguise odors. In addition, they quickly become unsightly and release unpleasant fragrances.

AROMA-SOLUTIONS® spray cartridges are made with quality, VOC-free ingredients and retain their effectiveness for the duration of the container.

Designed for use in automated programmable wall-mounted dispensers, AROMA-SOLUTIONS® spray cartridges are activated according to daily traffic. They are compatible with the majority of wall mounted dispensers on the market and are aesthetically pleasing even when left in plain view on surfaces. The AROMA-SOLUTIONS® line, exclusive to Larose, offers a choice of pleasant fragrances to satisfy all preferences, each one giving off a perception of cleanliness.